Spain’s Top 7 Contributions to the World

Information about Spain's top 7 contributions to the world and what makes them important achievements for Spain.


Many of the fun words we have in English were taken or adapted from the original Spanish...

Are you looking for another reason to love Spain? From art, culture, food, and literature to language, politics, science, and sports, Spain has undoubtedly made its mark on the world, and not only in terms of sangría, Alonso and Nadal, anarchist movements, sun and sand, or the invention of the mop. Spain has been much more than that, and not just during Spain’s Golden Age or after Franco’s death. Spain has long been a mix of tradition and innovation that continues to delight.

So how about 7 more reasons to cheer for Spain then? 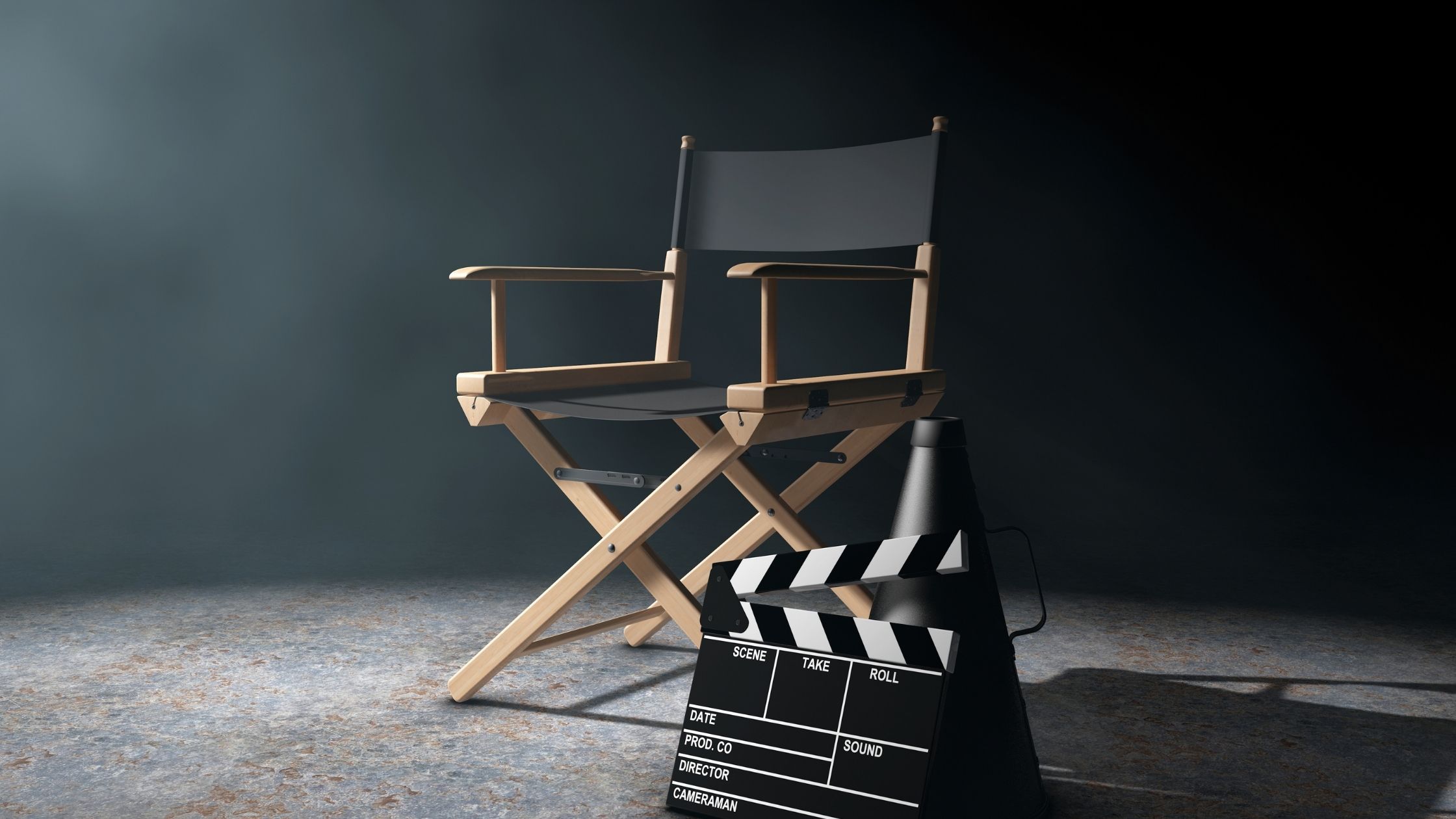 The current king of Spanish cinema, director and screenwriter Pedro Almodóvar continues to delight audiences both in Spain and abroad with his brash, unique filmic vision, which has earned him a bevy of awards and fans worldwide with such successes as Mujeres al borde de un ataque de nervios and Hable con ella. From 1980’s Pepi, Luci, Bom y otras chicas del montón to his most recent film Volver, Almodóvar’s films have been notoriously hip and disturbing, with heavy infusions of vivid colors, pop culture, and song. His films are often credited with bringing realism back to Spanish cinema. Whose reality though, it’s hard to say.

First as the film darling of the celebrated movida madrileña (an alternative cultural renaissance post-Franco) and now as a cinematic force of nature, his dramas and comedies have covered the whole spectrum of light to dark. Tackling themes such as female solidarity, loss, and sexuality, his films present a lavish world filled with housewives and prostitutes, bullfighters and nurses, transvestites and priests, people in transition and people on the margins of society.

Conservative critics have targeted the blatant sexuality, anti-Church stances, unapologetic homosexuality, and violence present in some of his films. Nevertheless, his films have received the most prestigious awards in the business: Oscars, Golden Globes, Goyas, Césars, BAFTAs, awards at the Cannes Film Festival, as well as a Prince of Asturias award, and Almodóvar enjoys wide popularity in Spain as well as abroad. It’s easy to think that he’ll be shocking and delighting both critics and audiences for years to come. 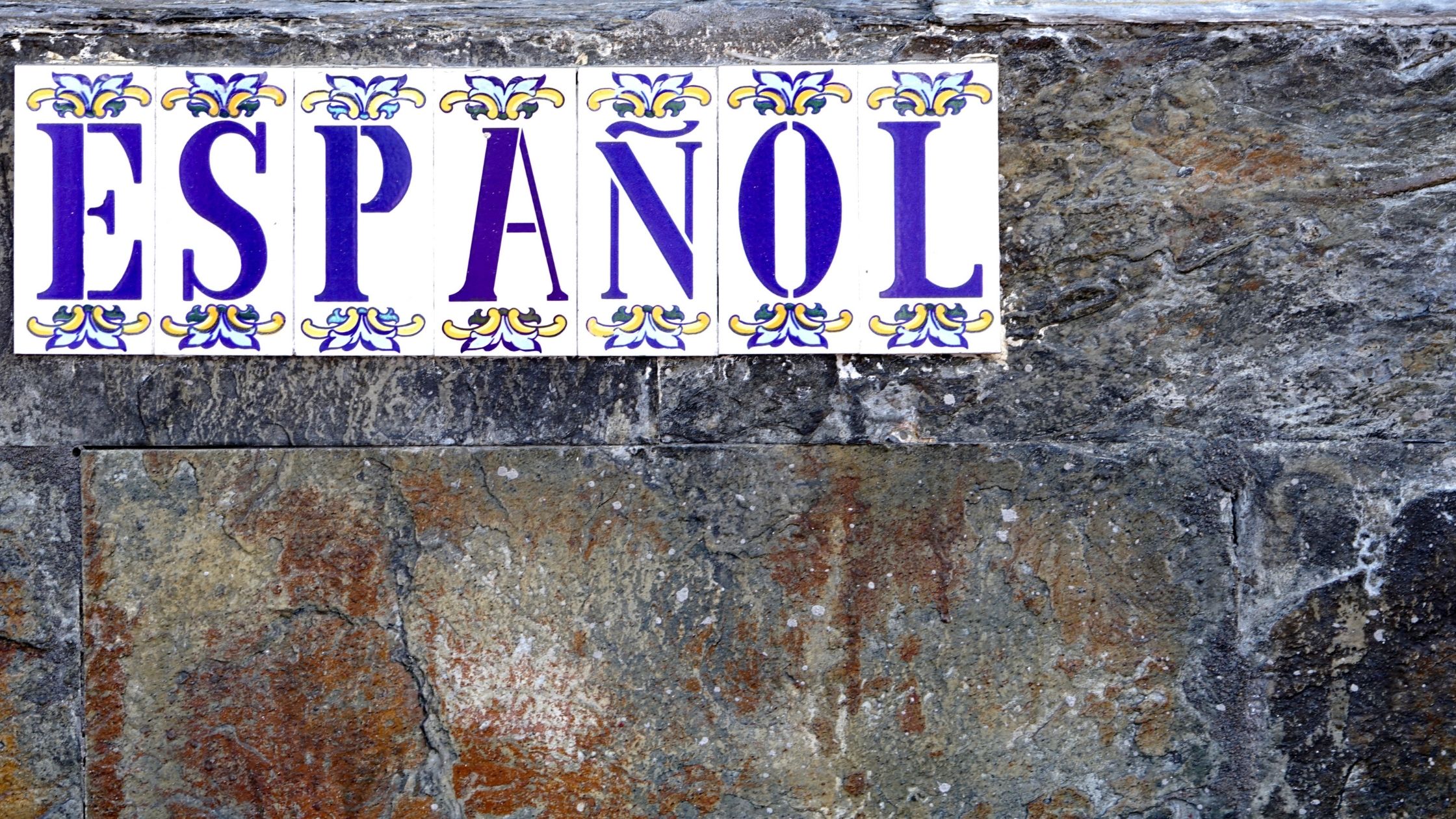 Principally derived from Latin in Spain’s northern regions, castellano, the language of Spain, (also known as español or Spanish,) has provided a rich legacy to the world in terms of the language itself, as well as Spanish words borrowed by other languages.

From the 16th to 18th centuries Spanish was the most important language in Europe, and although French and in turn English have upstaged Spanish in prestige among the elite, Spanish language usage just continues to grow.

What’s more, Spanish has contributed its rich vocabulary to other world languages. Take English for example. Many of the fun words we have in English were taken or adapted from the original Spanish. Consider words like: fiesta, siesta, hammock, buckaroo, amigo, vamoose, renegade, and filibuster. I mean, what’s more fun than a good old-fashioned filibuster or saying the word buckaroo three times fast? If you think cowboys and controlled substances are fun, then it’s good to know that Spanish gave us words like rodeo, lasso, marijuana, bodega, and tobacco. 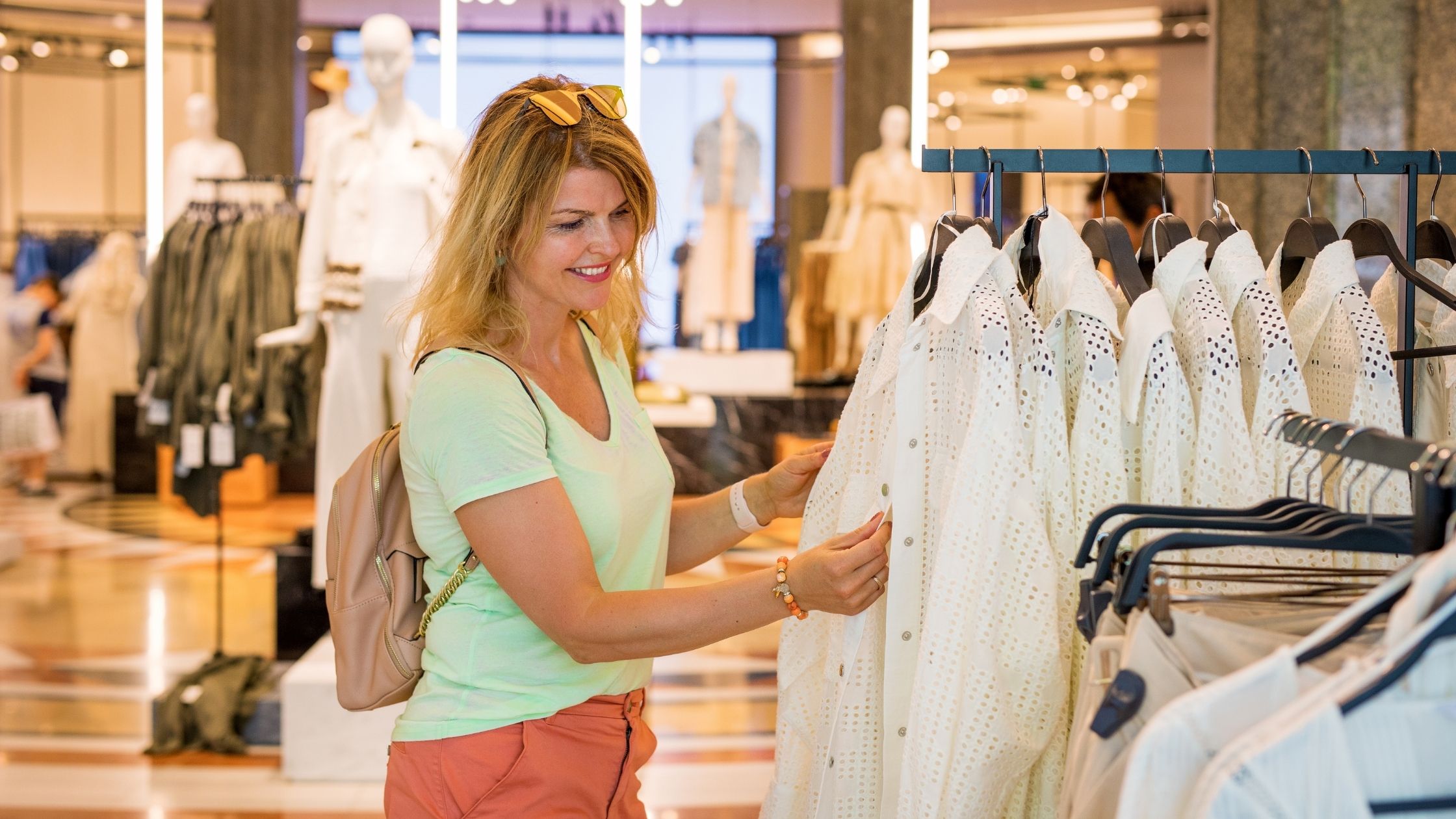 As a ubiquitous feature of heavy-traffic shopping districts throughout Spain and around the globe, Spanish fashion retailer Zara has become synonymous with stylish, reasonably-priced clothes for women, men, juniors, and children. Satisfied customers report that there is always something new at Zara. But in the business world, Zara has been heralded as an unlikely success story, achieving financial success and a strong global brand by going against traditional fashion wisdom.

Zara opened its first store in A Coruña, Spain in 1975, but currently has 1,026 stores in 64 countries around the world, 290 of which are located in Spain. Today Zara is the Inditex Group’s flagship brand, accounting for over 65% of the group’s revenue, and is still headquarted in A Coruña.

In 2006, Zara was named the 73rd Best Global Brand by BusinessWeek with a value of US$4,235 million and in 2007, Inditex was named the Global Retailer of the Year at the World Retail Congress. Yet Zara has been averse to the conventional advertising used by global competitors, relying largely on word of mouth and store window displays to attract customers with a false lure of exclusivity. Zara’s advantage at bucking the trend doesn’t stop there, however.

Keeping a tight rein on design, production, and distribution, and performing much of it in-house, allows Zara the freedom to introduce several thousand designs each year and constantly diversify their offerings to keep on top of trends and reduce risk with smaller batches. According to Time magazine: “The Spanish company [Zara] is often credited with inventing fast fashion, a business model that moves garments from the design table to stores quickly.” A scant two weeks is the time it takes, as cited by the company in BusinessWeek. Other chains, however, need nine months to take designs from the drawing board to the store.

It’s certainly no wonder that Zara is currently the world’s fashion darling and Spain’s flagship brand. 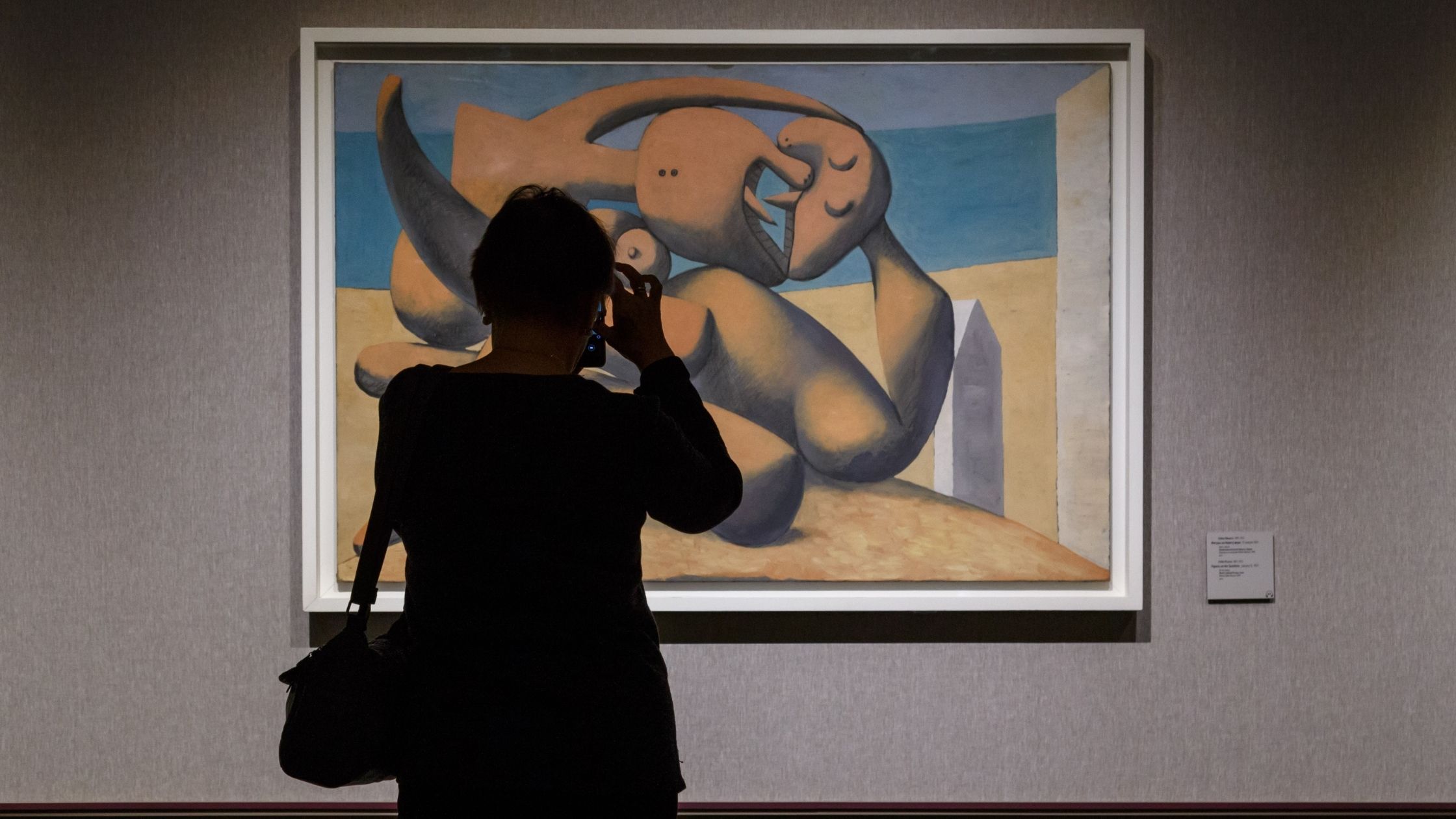 What would the world look like without the influence of Pablo Picasso, the man who revolutionized the art world as much as the Renaissance’s Michelangelo once did? Who knows, as it’s hard to imagine a world without Cubism and Guernica, without Spain’s most famous son. The 20th century’s most celebrated artist, Pablo Picasso was a daring, prolific sculptor and painter of Neoclassical, Surrealist, Expressionist, and Cubist styles. Frequent motifs in his art included circus people, prostitutes, horses, bulls, and harlequins. As co-founder of Cubism, he would perfect several Cubist styles throughout his career. Born in Málaga, Spain but resident of various cities in Spain and France, Picasso was named director of the Museo del Prado during the Spanish Civil War, an event which gave rise to his most famous work, Guernica. Commissioned by the Spanish Republican government for the 1937 Paris International Exposition, Guernica expressed the horrors of war on the civilian population (within the context of the Republican government’s fight for survival) in a bold, largely monochromatic, Cubist rendering. The large mural now hangs in Madrid’s Museo Reina Sofía, though a copy can be found at the United Nations headquarters in New York. 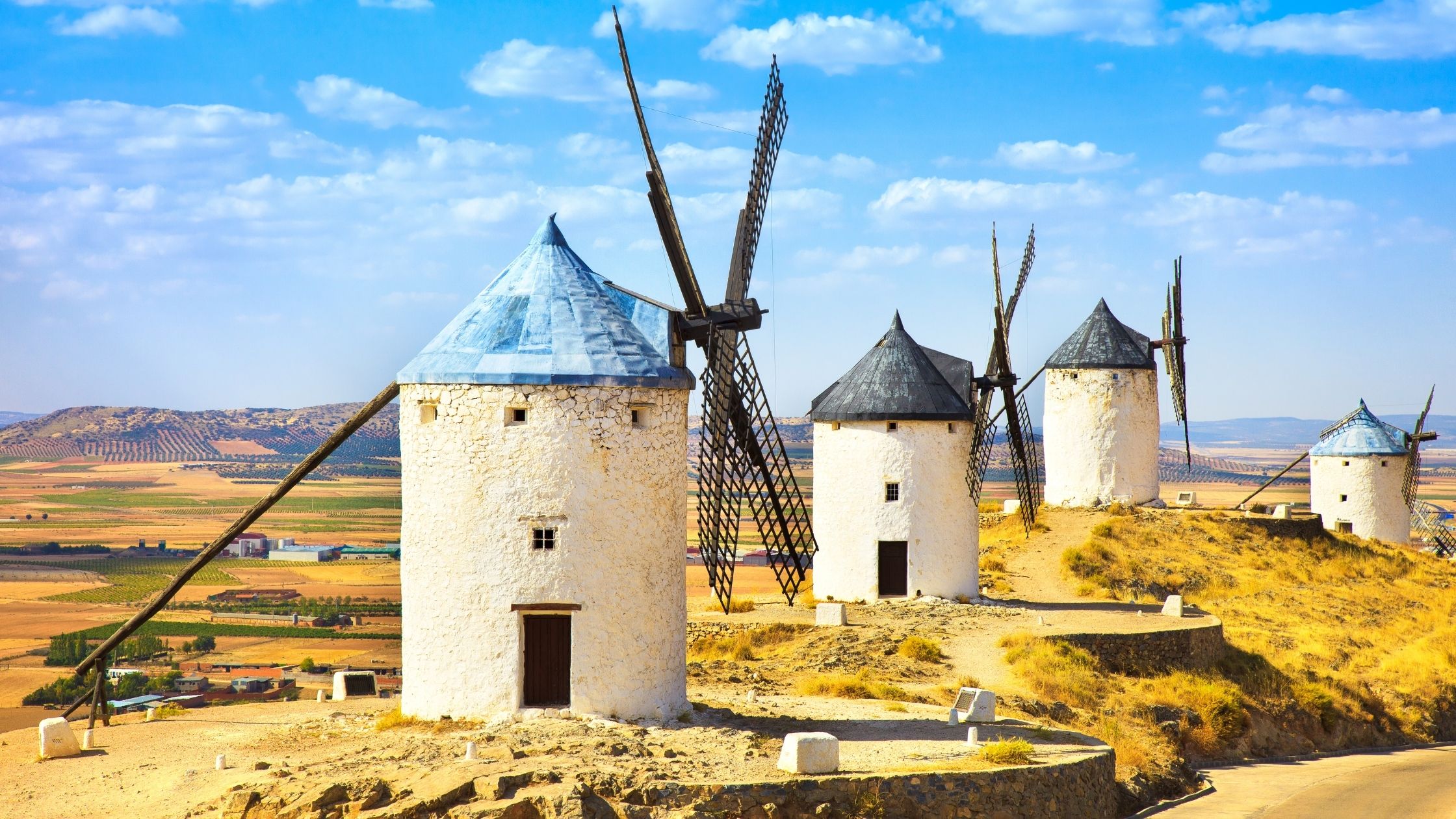 is without a doubt a standard of the universal literary canon. To get an idea of the book’s universality and influence, consider that only the Bible has been translated more times. Originally published in two parts in the early 1600’s, the Quixote has lost none of its influence or relevance, surviving throughout the centuries as the bright ambassador par excellence of Spanish culture. Credited with introducing generations of university students and literature fans around the world to Spain, the Quixote did more for La Mancha than Almodóvar. Consider that visions of Don Quixote and Sancho Panza contemplating the windmills of La Mancha in mock knightly splendor became synonymous with La Mancha, as well as with Spain itself. The Quixote has also inspired scores of artists and writers over the years, including William Shakespeare, Charles Dickens, Mark Twain, and Paul Auster, and given rise to such varied works as the musical “Man from La Mancha” and the children’s cartoon The Adventures of Don Coyote and Sancho Panda. Even today “That’s quixotic!” can be overheard in conversation, referring to something impractical or romantic, and harkening back to Spain’s classic hero.

6. The Alliance of Civilizations 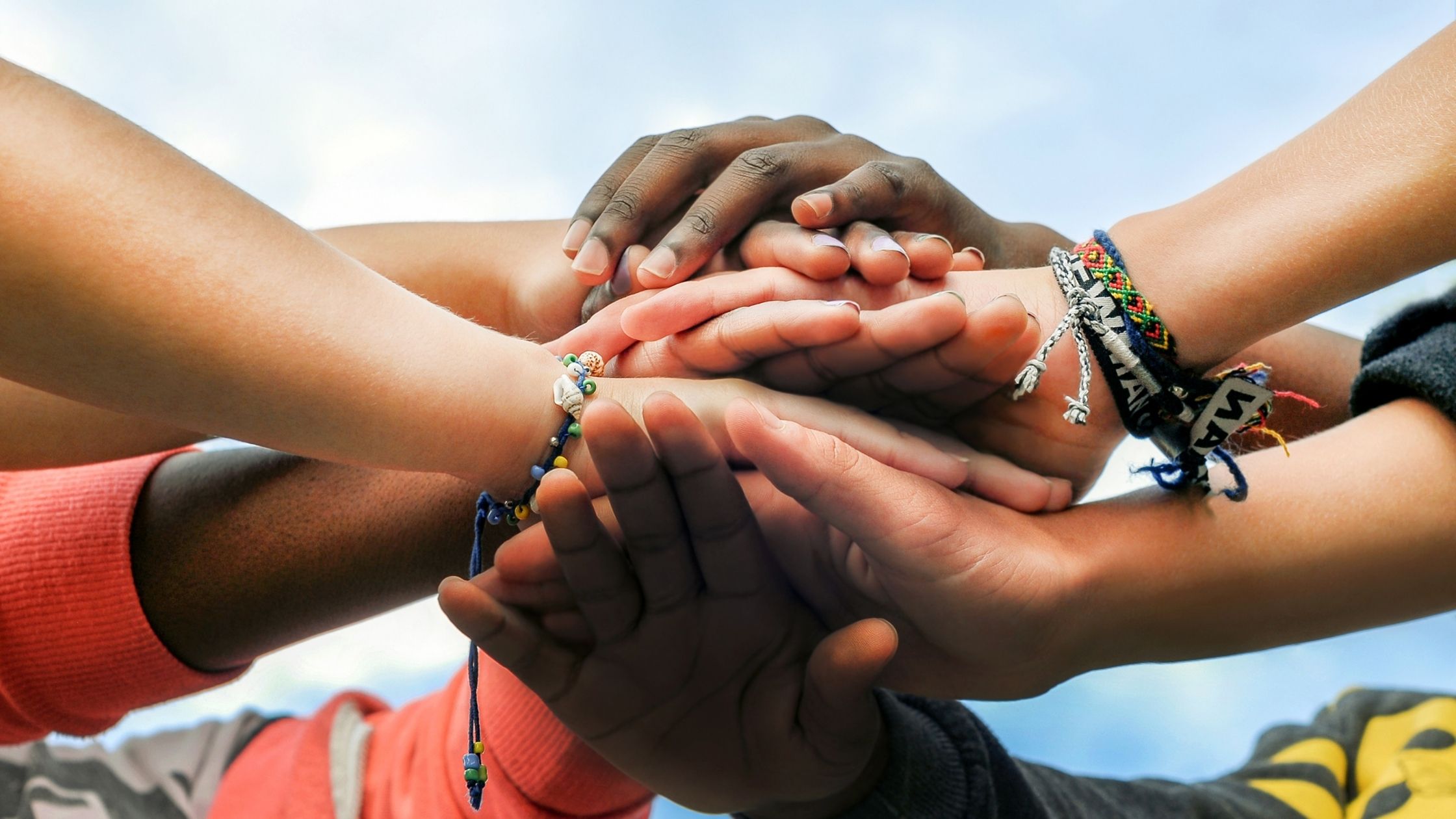 In today’s red-hot political climate, both Western and Arab/Islamic societies are faced with an increasingly polarized landscape. Spain, however, has decided not to sit back and watch, but help find answers. The Alliance of Civilizations is a United Nations initiative first proposed by the President of the Spanish Government José Luis Rodriguez Zapatero in 2004, co-sponsored by the Turkish prime minister, and supported by the UN, Spain, and other nations. The initiative’s goals include: fostering dialogue and understanding between cultures (especially Western and Arab/Islamic cultures) and religions in support of cooperation and peace, and preventing extremism and war. As a result of the associated High-Level Group’s report, the Alliance of Civilizations adopted the following priorities for outreach and research: immigration, youth, politics, media, and education. Proponents of the initiative consider it a step towards world peace and away from extremism, while critics of the initiative consider it a naïve move, but in any case, the Alliance of Civilizations clearly represents Spain’s willingness to take on today’s complex global issues and find solutions. 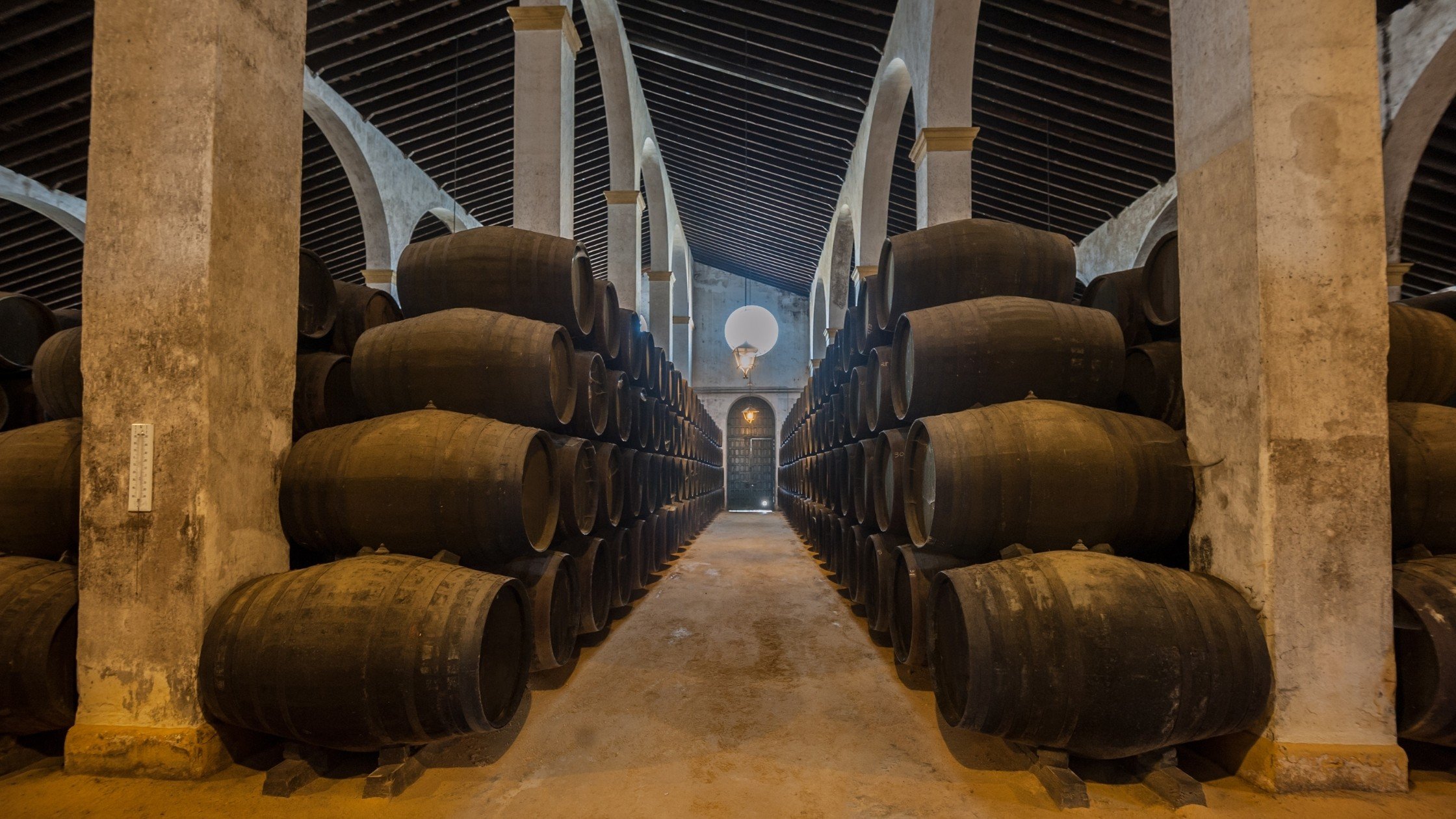 Not a popular recipe like sangría or a second cousin like cava is to champagne, sherry represents a unique experience, and not just at the hands of today’s popular brand Tío Pepe. Sherry, or jerez as it is called in Spanish, is a dry, fortified wine that contains 15-17% alcohol, is most commonly made from Palomino grapes, and is only produced in Jerez de la Frontera, Sanlúcar de Barrameda, and El Puerto de Santa María in southern Spain. Drinkers can be assured that real Spanish sherry is guaranteed by its denominación de origen (DO). Perhaps surprisingly, the United Kingdom consumes more sherry than any other country in the world, including Spain. Nevertheless, sherry is enjoyed by many, including the American television character Frasier Crane, who helped revive sherry-drinking in the US by making it a more sophisticated and intellectual drink. The Cleverness in Sherry Advertising award would have to go to Tío Pepe though. Responsible for a large share of the world sherry market, González Byass’s Tío Pepe is a brand known for its iconic bottle of sherry dressed in a red hat and jacket carrying a brown guitar. (A prime example of this famous bottle looks down upon Madrid’s Puerta del Sol, far away from its Andalusian roots.) Tío Pepe is also known for its Fino Sherry. Besides Fino, other common sherry varieties include: Oloroso, Manzanilla, Palo Cortado, Jerez Dulce, Amontillado, and Cream. Sherry-drinkers say that some varieties are better with certain foods, but the consensus is that sherry is best served cold and best savored with food. ¡Salud! Now that we’ve had our say, what’s your favorite Spanish contribution to the world?

Comments on Spain’s Top 7 Contributions to the World

Well I do not see how one can not list TAPAS and EL TAPEO..... + what about FLAMENCO + the world's 2nd highest number of UNESCO WORLD HERITAGE LISTINGS ???? saludos, Montse

Chorizo, Modernisme architecture, Churros con chocolate, Manchego cheese, Penelope Cruz, Rioja, Flamenco, paella, empanadas, and much much more! Edit: I hadn't noticed there were other comments! I agree tapas for sure should be on the list, I should have thought of that!

Continue reading in Top 7 in Spain