Information about Spain’s beaches, Spain’s main types of beaches, the Balearic and Canary Islands as beach destinations, and tips for going to nudist beaches in Spain.


D’en Bossa Beach is one of Spain’s main party beaches and a stone’s throw away from the clubs and keepers of the famous Ibiza sound on Spain’s riotous island of Ibiza.

What comes to mind when you hear the words “sunny Spain”? I’ll bet you probably thought about Spain’s seemingly endless stretches of beaches. In fact, Spain has almost 8,000 kilometers of coastline, and Spain’s geography and 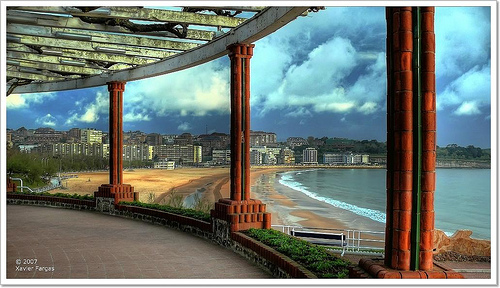 City beach – Want to hit the beach but don’t want to leave the big city? The hip port city of Barcelona (Catalunya) boasts six beaches, with Barceloneta Beach being the most centrally-located to the centre and unsurprisingly the most popular.

Famous beach – La Concha Beach in the city of San Sebastián (Guipúzcoa) is Spain’s most famous beach and rivals El Sardinero as the most beautiful beach in Spain. In any case, it is San Sebastián’s most prized jewel. The beach sits on shell-shaped Concha Bay where the old historic district (the casco viejo famous for its tapas), rolling green hills, and Santa Clara Island can be seen in the distance. In the summer stronger swimmers can swim out into the bay to platforms for diving and fun.

Gravelly beach – Calahonda Beach, one of many beaches in Nerja (Andalucía), is a quaint beach with dark gravelly sand on the infamous Costa del Sol. There small, brightly-painted boats beached on the sand and a herd of cats weaving between them are familiar sights.

Inland beach – Los Nietos Beach is a local dark sand beach on the Mar Menor located right next to the town of Los Nietos. Actually a saltwater lagoon, the Mar Menor is separated from the Mediterranean Sea by a thin strip of land known as La Manga (literally, The Sleeve).

Nudist beach – For those who want to show some skin, Los Muertos Beach in Carboneras (Almería) has a pretty beach that doesn’t get too crowded.

Nudist gay beach – Las Balmins Beach in Sitges (Catalunya) is geared towards those looking for all things naked and all things gay in one place.

Party beach – D’en Bossa Beach is one of Spain’s main party beaches and a stone’s throw away from the clubs and keepers of the famous Ibiza sound on Spain’s riotous island of Ibiza (Baleares).

Year-round beach – A pretty and sandy beach, Juan Gómez beach in Fuerteventura (Canarias) is open all year round.

When going to nude beaches in Spain be sure to keep these tips in mind...

Beach Central: The Balearic Islands and the Canary Islands

The two most popular places for beach experiences in Spain aren’t on the mainland but on Spain’s two island chains. The Balearic Islands are located east of Catalunya, south of France, west of Sardinia, and in the middle of the Mediterranean Sea. They are composed of four islands – Mallorca, Menorca, Ibiza, and Formentera – and boast more than 300 beaches combined, some of them located in intimate coves. Most of the islands’ beaches have smooth sand, but a few have small pebbles or large rocks. The busiest time of the year on the islands is during July and August. The Canary Islands are located west of Morocco and the Western Sahara in the Atlantic Ocean and are composed of seven islands: Tenerife, Gran Canaria, Fuerteventura, La Palma, Lanzarote, El Hierro, and La Gomera. The islands are volcanic in origin and some of the volcanoes are still active today. In fact, the island of Lanzarote is known for its volcanic landscape that is likened to that of a lunar landscape. Due to the warm, pleasant climate, the Canary Islands’ beaches are generally suitable for swimming year round.

Tips for Nudist/Nude Beaches in Spain

When going to nude beaches in Spain, be sure to keep these tips in mind:

Continue reading in Play in Spain

Information about dating in Spain, including online dating sites, dating ideas, relationships, and insight into the dating scene in Spain.

Information about tennis in Spain. Where to play, how much it costs and some of the best private and public courts across the country

Information about dating in Spain, where, how and when to find a partner in Spain. Note that some of the dating tips here are presented with a touch of sarcasm.

This article talks about some basic considerations when looking for camp sites in Spain, and about camping in Spain generally.

Who Told You To Leave The Gear Behind? This is your guide to some of the best skiing in Spain, especially for expat ski bums who might be looking for a seasonal job at a ski resort in Spain.